Take Your Wings and Fly

I’ve just finished reading Jason Smart’s first paperback “Take Your Wings and Fly - A Journey Through a Private Pilot’s Licence”. It’s a book that charts his progress through learning to fly light aircraft in the United Kingdom.

Jason was living in Bradford, West Yorkshire in the North of England when he decided he wanted to learn to fly. A friend took him up in a microlight, a very small and light aeroplane that Jason likens to a toboggan with a propeller attached to the back. With the wind rushing past his face in the open cockpit and his vertigo kicking in he admitted he’d never been more scared in all his life!

Undeterred he returned to Barton Aerodrome near Manchester a few weeks later for a trial lesson in a Cessna 152. This time in the heated cockpit of the light aircraft he loved the experience. Thrilled at taking the controls for the first time, holding the plane straight and level and practising a few turns he decided he would peruse his dream of learning to fly. After passing his aviation medical, studying the training manuals and saving up for the (unfortunately quite expensive) flying lessons he started his training. 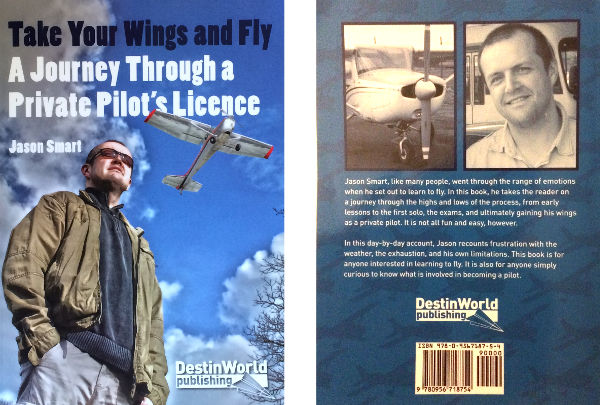 The remainder of the book charts his progress through the UK Private Pilot’s Licence (PPL) in diary form, showing the date for each entry along with lesson number, total flying hours and exercises conducted. This is interspersed with good humour, more detailed information on the various types of licences and ratings that are available, the social aspects of flying clubs and the work/life balance.

Along with getting his head around the various technicalities of learning to fly, Jason also covers the emotional journey in learning to fly. In the United Kingdom this obviously includes the trials and tribulations related to our changeable weather, he recounts many examples of lessons having to be changed, curtailed or even cancelled due to tempestuous weather.

But the emotional challenges aren’t limited to the weather. He discusses in a very accessible way what it feels like to be completely overthrown by the number of procedures and simultaneous activities that have to be mastered in order to become a pilot, something that he really struggles with in the early lessons. Jason also spends time talking about what it feels like to fly with a different instructor after building up a rapport with someone else. And the difficulties posed with not getting on well with an instructor.

This book won’t teach you much about how to fly, but it will inform you of what’s involved in learning to fly, including all the different milestones involved. From taking the controls for the very first time, to flying solo. From the first bumpy landing to fears of getting lost on the qualifying cross country. From the written theory exams and skill test to all the different items that need to be bought including books, charts, square protractors, checklists and even sunglasses.

I thoroughly enjoyed reading Jason Smart’s book. It gave me a real insight into what would be involved in gaining a Private Pilot’s Licence as well as being an entertaining and enjoyable read. I can see myself coming back to this text time and again, sharing extracts with others and maybe even pursuing my own desires in becoming a pilot.