Since my last lesson I’ve bought my own knee-board. A knee-board is very similar to a conventional clip-board, but it has a strap on the back that goes round your leg so you can write on it while talking to the air traffic controllers without fear of it falling off your lap. The one I went for is called a Pooley’s CB-8. As well as a clip to hold paper and loops on the side to hold your pencils, it can also flip open and inside there are 4 clear plastic pockets. I thought this may come in useful when I start needing airport diagrams for other airfields.

I also bought volume two (Air Law and Meteorology), volume six (Human Factors and Pilot Performance) and the EASA supplement (Operational Procedures) of the Air Pilot’s Manuals. I don’t intend to take the exams yet, but I thought it wise to start revising as you need a 75% pass mark on each exam. 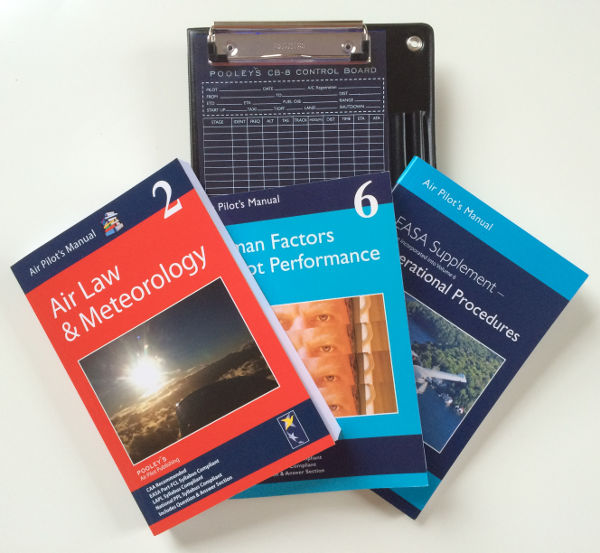 Today we were in G-GFCB again, I was happy about this because I had not felt very confident after the last lesson so hoped some consistency in the plane I was flying would help. Derek asked me if I wanted to do the radio calls today, I’d been reading the CAA’s Radiotelephony Manual (CAP 413) so felt confident I could handle this, first we listened into the ATIS and then it was my turn to talk to the tower. The first call was easy:

To which the reply came at an incredible speed:

All fine so far, I started the engine and then it was time to call the tower for the taxi clearance. Calling them wasn’t an issue, it was simple, just:

But the reply from the tower threw me:

I just wasn’t prepared to write it down. Listening back to it now it seems so simple, but my mind just went blank. I sat there for a few moments hoping for divine intervention, but when that didn’t come I realised I needed to do something. So I gingerly pressed the intercom button again and said:

I’m not sure the controller could believe what he was hearing. He’d just given the simplest of taxiing instructions and the pilot was asking him to repeat himself. He calmly repeated the instruction. This time I just about had the wherewithal to write some of it down on my knee-board, I repeated my taxi clearance:

But I’d missed out the QNH, the controller reminded me of this and I repeated it back to him. This had put me in nervous state and couldn’t work out what to do next. I just looked at Derek blankly and shrugged. Then I suggested he call for taxi clearance, he said we already had this. I took a deep breath, got a grip of my senses and worked out we needed to start taxiing towards the holding point. Brake off, power at 1,200 RPM, we started moving, what a relief!

After completing the power checks it was time to talk to the tower again, this time to inform them we were ready for departure. We were told to hold where we were as there was lots of other commercial traffic taking off and landing. We spent nearly 10 minutes sat there, and then amidst all the other radio chatter the tower mentioned my plane’s registration:

Golf Charlie Bravo, I have your clearence.

I couldn’t quite make out what he was saying, so stumbled and stammered over the radio and managed a “Go ahead” to which the response was fired at me like machine gun bullets:

More flustering and pausing from me, but I managed to just about read this back. I was given permission to line-up and wait on the runway, but before we got there we had our takeoff permission, Derek took over the radio at this point to help relieve the workload. You can judge my performance yourself in this 4 minute video:

Once out of the controlled airspace past Cheddar Reservoir we could start the flying part of my lesson. First up was medium level turns, these are turns that should not exceed 30° of bank. As my instructor and I are sat side-by-side the longitudinal axis passes between us, this means that when I turn to the left I will be in a lower position than when in straight and level flight, and Derek will be in a higher one. When I turn to the right the roles are reversed and this time I will be the higher one and Derek the lower one. Therefore the horizon will look different depending on which way I am turning, and being a pilot flying by visual reference I will need to learn what these look and feel like so I do not spend time looking at the instruments when I ought to be looking out the window.

I managed to get the hang of this quite quickly, so we moved onto climbing turns. As the plane will have maximum power applied when in a climb and turning will take some of the energy out of the climb, I will need to lower the nose slightly so we maintain climb speed and limit the turn to no more than 15°. We tried both left and right hand turns, again without much issue. This was more like it, I was enjoying flying again now I didn’t need to worry about that pesky radio.

After this we did some descending turns. There’s one extra thing to remember when starting a descent and that is the carburettor heat, both setting it to hot just before the descent and setting it back to cold when levelling off. I’d needed to be reminded of this last lesson and today wasn’t much better, especially as I now had to concentrate on a turn as well.

Climbing Above the Cloud Base

We spent the rest of the lesson flying in spirals going up and down, left and right over the Somerset countryside. Sometimes I had to turn onto a specific heading, Derek would tell me what heading to aim for and explained I should start rolling out of the turn 10° before the desired heading. When this was to a heading with a number written on the direction indicator (e.g. 270°) I found it quite easy, but when it was between numbers (e.g. 075°) I found it much more difficult and would regularly over-shoot.

The cloud base was reasonably low in some parts, every so often we’d fly high enough to see over the tops of the clouds. This was absolutely beautiful, the most awe-inspired I’d been since I started learning to fly. I was handling the controls a lot more confidently and felt like it was all starting to come together, I even remembered the carburettor heat once or twice.