When I arrived at the club Derek told me to go and check the plane on my own. Quite a responsibility, but if I were ever to fly solo I’d need to be confident I could run through the checklists without anyone else double-checking. I made my way out to the apron and started the external checks. I was in a different plane today, still a Piper PA-28-140 Cherokee, but one with the registration G-AXTL. It was an older plane that had been out of service while it was fitted with a new engine. It was so new the oil was almost translucent, making it hard to read the dipstick.

Derek joined me after I’d finished the checks and asked if I’d seen the key, “No” I said, this was a problem! A little investigation led to the discovery the previous student had taken the keys with her after her lesson. We had to wait an age for he to return to the club with them, Derek was not best pleased. We were finally on the move an hour after my lesson was supposed to have started. 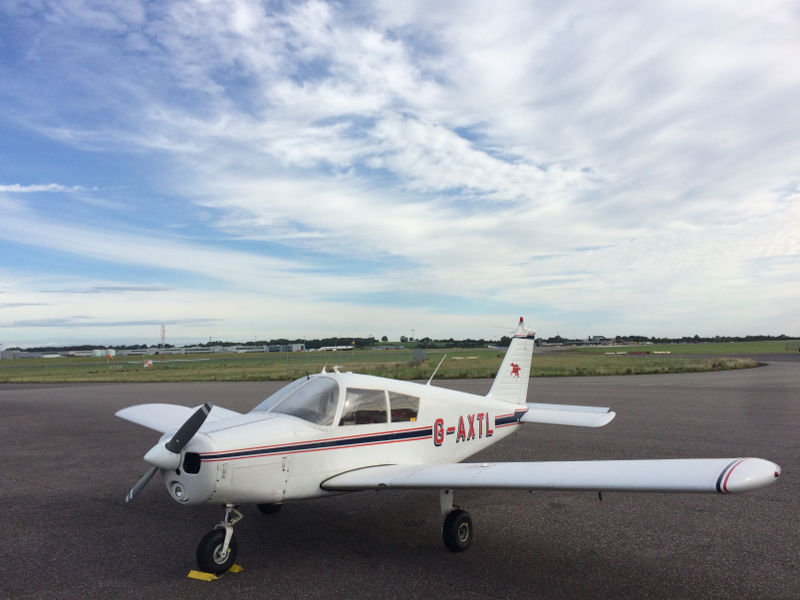 Some of the controls in this older plane were in different places than I was used to, the trim was not a wheel between our two seats, but a rotating handle above our heads (much like the handle for an old sunroof in a car). There were also no brakes on the rudder pedals, all the braking had to be done with the hand-brake.

We were given permission to take-off, I applied full power and started rolling down the runway, but for some reason I was having trouble keeping the aeroplane on the centreline, then once in the air I was still drifting to the left when I should have been tracking the runway as if following an extended centreline away from the airport. The wind may have been pushing me, nevertheless, I need to work on this.

We turned towards Cheddar Reservoir and as we were passing over the Mendips the Tower asked me to switch to Bristol Radar and said goodbye. Derek was giving me more and more to do in the cockpit so asked me to talk to them. I changed frequency and made contact:

The reply came back:

Once again I wasn’t ready, didn’t write anything down on my knee-board, panicked, looked at Derek and whimpered slightly. He told me what to say:

Once clear of Bristol’s controlled airspace we climbed up to 3,500 feet and ran through the HASELL check I learnt two weeks ago, here it is again:

Then Derek talked me through a power-off stall, exactly the same as last lesson. Reduce power to idle, then raise the nose to maintain hight, keeping on lifting the nose until our speed gets critically low. The controls will become sloppy, the stall warner may sound, then the aeroplane will start to shudder. These are all signs we are about to stall and should take action to ensure we don’t actually stall, except today as we’re learning how to recover. After the plane has stalled push the stick forwards BUT ONLY JUST BELOW THE HORIZON not fully forwards like last time!

Now it was my turn. We climbed back to 3,500 feet, ran through the HASELL check and reduced power to idle. Then, once in the stall I tentatively pushed forward on the stick and made sure we didn’t dive towards an early grave. Not surprisingly Derek told me off for being too slow and reminded me that it was incredibly important to get the speed back to 60 knots with the nose below the horizon. We tried it again and this time I was starting to get the hang of it.

Then we tried stall recovery with power, which is where you push the nose below the horizon and apply full power. This is how you would always recover from a stall unless the engine had failed. Finally, Derek talked me through how to avoid a spin. When the aeroplane stalls, one wing can stall before the other, banking the plane. When this happens you mustn’t try and lift the wing as you could put the plane into a spin, instead you should put down opposite rudder. We tried this a few times, but the neither wing would fall before the other. I felt I understood the principles of how to avoid a spin, so Derek called it a day. This map shows our route, as you can see there are lots of turns as we practice a stall, recover, then turn around to avoid haxards below.

As we were lining up on our descent back to the airport Derek talked me through the landing phases. Flying down the runway’s extended centreline we maintain speed with the stick and height with the throttle. This sounds counter intuitive, but is designed to keep the plane in the correct attitude. If you want to increase speed you push the nose forward, to slow down you pull back. To increase the descent rate (make it steeper) you reduce power, to decrease the descent rate (make it shallower) you add power. Once over the runway piano keys (the white marks at the threshold) power is reduced to idle and the nose raised to flair the wings, the trick being to try and not let the plane land, the speed will reduce and finally touch-down smoothly on the tarmac.

Derek was pleased with my progress and said next lesson we’d start circuits.