Today was the first of two lessons this weekend, I met Derek at the club but he felt the wind was too high at Bristol for circuits, so he called Cardiff airport and booked us in for circuits there. The air traffic controller (ATC) gave us a route through the controlled airspace that took us south of Bristol even though we wanted to go west, Derek was a little annoyed about this, but what ATC say goes, so we headed for Cheddar Reservoir before being allowed to turn west towards Weston Super Mare.

We headed out across the Severn and over the little island of Flat Holm, then on towards the docks at Barry. It didn’t take long, only about 15 minutes, but it was a busy phase of flight, I had to switch between Bristol Radar and Cardiff Radar, update my squawk code as I transitioned the air spaces, regularly check I remained at or below my maximum assigned altitude and switch from QNH to QFE as I approached Cardiff airport.

This last point requires an explanation. When flying you need to know your altitude so you can keep a safe distance above ground, keep a safe distance vertically between other aircraft and plan your ascent and descent. This is achieved using an instrument called the altimeter. As you climb the air pressure gets less dense, the altimeter uses a barometer to measure the air pressure and from this calculates your altitude.

However, air pressure changes from place to place, so to know where ground level is, you need to know the local air pressure. But the ground level also changes from place to place in the form of hills and valleys, so it is often preferable to set the barometer in your altimeter to show zero feet as mean sea level. This is such a common setting that it has been assigned a special Q code called QNH. The Q stands for Query and the NH stands for Nautical Height which is another way of saying height above mean sea level.

This is ideal when flying over undulating ground, but it does mean you need to know the exact elevation of the aerodrome you’re going to take-off and land at so you can fly the circuit pattern at correct altitudes. For example, after take-off you should turn cross-wind when 500 feet above the runway, then fly at 1,000 feet until on base leg where you should descend and turn final at 600 feet. Bristol has an elevation of 622 feet, Cardiff’s elevation is 220 feet. Having to make these calculations mentally at a very intense phase of flight may lead to errors and this could affect safety. 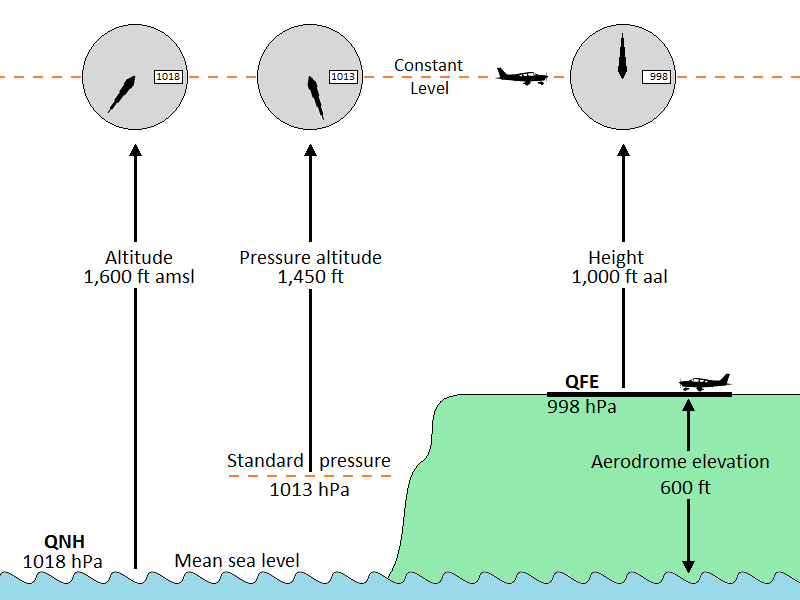 There is one final pressure setting called the standard pressure. This is only used when above the transition altitude, this varies from place to place but in the UK is between 3,000 and 6,000 feet. The reason for using standard pressure is so that aircraft a safe distance above ground don’t need to keep changing their altimeters as they move between different regions with different air pressures. When using standard pressure your altimeter won’t tell you how high you are above ground or above mean sea level, but you will know that every other aeroplane above the transition altitude is using the same pressure setting, so you can be sure to fly at an altitude that’s safe to maintain vertical separation from other planes.

Unfortunately my GoPro camera suction mount came loose just after take off so I wasn’t able to record the majority of the lesson nor any of my landings.

Cardiff airport is right on the coast unlike Bristol which is inland. So it looked quite disconcerting flying over the sea and seeing the cliff edge just before the runway threshold. It was also the first time I was landing in anything other than a westerly direction. Bristol’s runway is exactly east-west, but Cardiff runs roughly south-east to north-west, so this meant all my reference headings were different to what they had been last lesson.

I was a bag of nerves as I flew the circuit pattern. I kept on forgetting the headings to fly for the different phases of the circuit. I wasn’t remembering to put right rudder in as we turned. I could only remember the first few of the BUMPFFICH checks (Brakes, Undercarriage, Mixture, Pitch, Fuel, Fuel pump, Instruments, Carburettor heat and Hatches & harnesses). My approaches were bad, I was drifting off the extended runway centreline and my landings were hard.

We did five touch-and-gos before heading back to Bristol. I knew it had been a bad lesson so tried to salvage some sense of achievement on the 20 minute return flight. I paid extra attention to the rudder, tried to relax and prepared for my last landing, this time at Bristol. The approach was fine, I stayed on the extended runway centreline and managed a half-decent landing. So maybe it wasn’t a complete write-off. Hopefully tomorrow will be better.