I had to put the failures of yesterday’s lesson behind me. After an early night I awoke feeling refreshed and ready to go for my 9am lesson today. The weather was beautiful, very little wind and hardly a cloud in the sky, the ATIS described the weather as CAVOK (cav-oh-kay) meaning Ceiling And Visibility are OK, or more specifically the visibility is at least 10km, there’s no cloud below 5,000 feet, no cumulonimbus clouds in sight at any altitude and no other significant weather.

Today I would be flying G-BCJN, a lovely little Piper PA-28-140 Cherokee I’d flown several times before, including the first time I did circuits last week. It’s a little smaller and slightly less powerful than the 161 I’d flown yesterday, making it the perfect training aircraft. I was feeling very positive about today’s lesson.

I put on a high-vis jacket and made my way out to the plane to start the pre-flight checks. I’d bought an ASA Fuel Tester from the club yesterday, today was the first time I would be testing the fuel on my own. 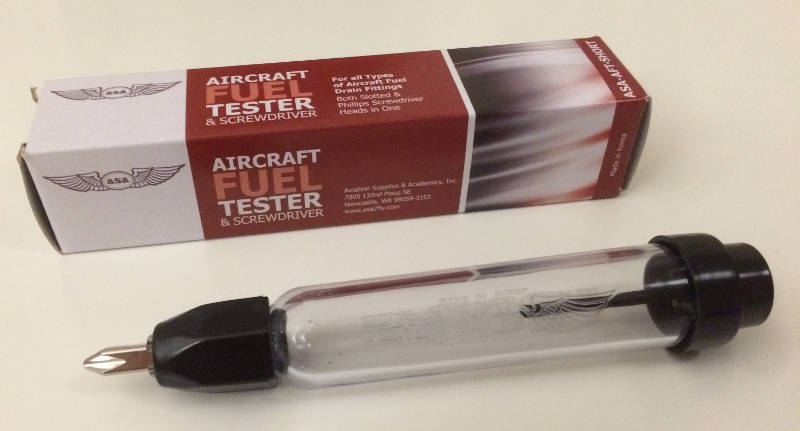 You take the black cap off and push the open end up into the fuel drain valve on the underside of the wing. Fuel flows out filling the container (and then spills over onto your hand if you’re not careful!) Then you hold it up to the light to check it has a light blue tinge, ensure there are no contaminants (floating bits) and no water at the bottom (aviation fuel is less dense than water, so if there’s any water it’ll sink to the bottom). This is most important to check first thing in the morning before the first flight, as condensation could have formed inside the fuel tank making it dangerous to fly. Finally, you should smell the fuel to check it’s the right kind, although I’m not yet sure what the wrong kind (or even the right kind) smells like, I sniff it anyway in the hope my primeval nasal instinct will alert me of any dangers. It smells like fuel. I’m happy with that.

I take off from runway 27 but don’t put enough right rudder in and we start to drift left. The Flying Training book talks about looking at a point in the distance and keeping the aeroplane in line with that. But so much is going on at this phase of the flight that I forget to look for a distant landmark, and by the time I remember we’re off course, so finding one now will only keep us off course.

At 500 feet I turn left onto the crosswind leg, a rate one turn limited to 15° of bank because we’re still climbing. I level off at 1,000 feet and once the airspeed is up to 90 knots I reduce power to 2,300 RPM. Then it’s a left hand turn onto downwind, this time I can turn at 30°. Now it’s time to call the tower and let them know where I am and what my intentions are

To which the reply comes:

There’s no one else in the circuit, no one taking off or landing, so I can fly round and expect to land without having to orbit while commercial traffic proceeds in front of me. Next I go through the the BUMPFFICH checks:

However, I keep forgetting Pitch, mix up the Fs (Fuel & Fuel pump) and often forgot Carburettor heat as well as Hatches and harnesses.

At the end of the downwind leg I make a 30° left turn onto the base leg and reduce power to 1,500 RPM, keeping the nose level to reduce the airspeed to 70 knots. Once the speed is in the white arc I lower the first stage of flaps, then the second when I’m sure I’ll make the landing. Then at 600 feet I turn left onto final, time to call the tower again:

My landing clearance is given:

I still struggle to keep the plane on the runway centreline all the way down the descent, Derek suspects I’m over-compensating. I land fairly well, turn the carburettor heat off, raise the flaps, apply full power and at 60 knots pull back on the stick to take off again.

I manage to complete 7 take offs and landings this lesson, all of them pretty okay. I’ve nailed the circuit, my heights and turns are all fine for now, I’ve just got to get better at the approach and landing phase. I’ve also got to revise my BUMPFFICH checks, they should come naturally when I’m on downwind. But at least it wasn’t the disaster I had yesterday.