Just like last weekend the reputation of RAF Lulsgate Bottom (the original name for Bristol Airport) was living up to its name as a bad weather training airfield. Visibility was about 2.5 km and the cloud was down as low as 200 feet, so my lesson was again cancelled.

Instead, today I’m going to write about my cockpit recording equipment. It wasn’t until reading Nic Rodgers’ excellent blog that I discovered it was possible to record flying lessons so easily.

I bought an entry level GoPro HERO camera along with a 32 GB SanDisk Extreme microSD memory card which can store over 2½ hours of video. The camera itself is a small HD camcorder with no LCD screen. It comes in a housing that’s waterproof so you can even take it swimming. You may think not having an LCD screen is a problem for knowing where to point it, but it has a fish-eye lens which means as long as it’s facing the action it’ll almost certainly record what’s going on.

I wanted to mount the camera on the inside of the aeroplane, the simplest way to achieve this is with a suction cup mount. The official GoPro Suction Cup boasts the ability to stay attached at speeds of over 150 mph, but it is expensive. As I don’t want to mount the camera on the outside of the plane I opted for the DEYARD Suction Cup Mount sold by Amazon for about quarter of the price of the GoPro one. However, it has come lose and fallen off a couple of times, so maybe the GoPro mount is worth the extra money.

This works well for recording video, but the little microphone in the camera can only pick up what’s being said in the cockpit without the engine running, which isn’t much use when we get airborne (or even while just taxing!) So I bought a cable from Transair that connects to the intercom in the aeroplane, it also picks up what’s being said over the radio.

In order to actually record the intercom I bought a GoPro 3.5mm Mic Adapter. However, I should have checked the details before ordering because it doesn’t work with my entry level GoPro HERO, it only works with the HERO3, HERO3+ and HERO4. Therefore, I bought a Sony MP3 Digital Voice Recorder, but this does mean I am recording the video with one device and the audio with another, which makes synchronising them for my YouTube videos difficult. You can see the recorder connected to the aeroplane’s intercom in this picture: 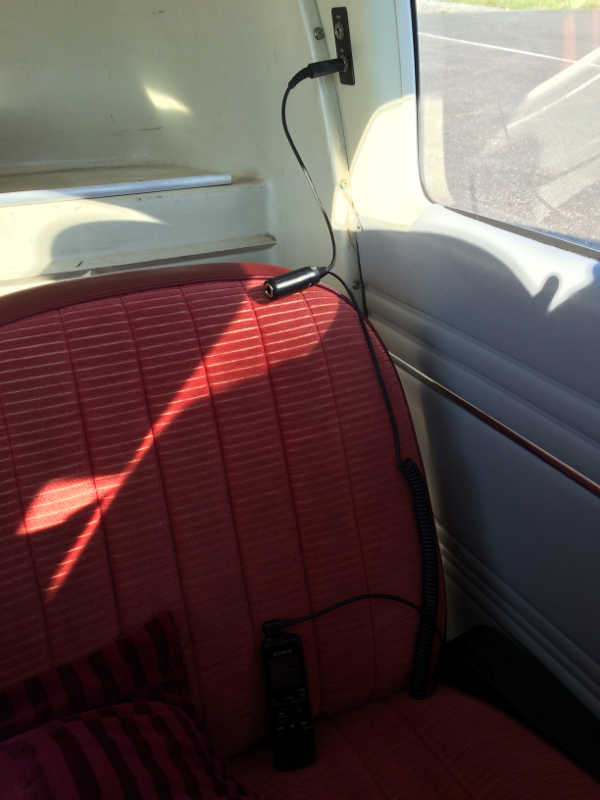 I’ve been pleased with both the GoPro camera and Sony voice recorder. Their battery capacities and recording capabilities have been well within the sub two hour flying lessons I’ve had to date. Let’s hope that next week I can actually use them to record a flying lesson.