Today was overcast with the cloud base just a few hundred feet above the airport, so once again my lesson was cancelled, the fourth cancellation in a row. So instead I thought I’d write about the flight equipment and books I’ve acquired so far. 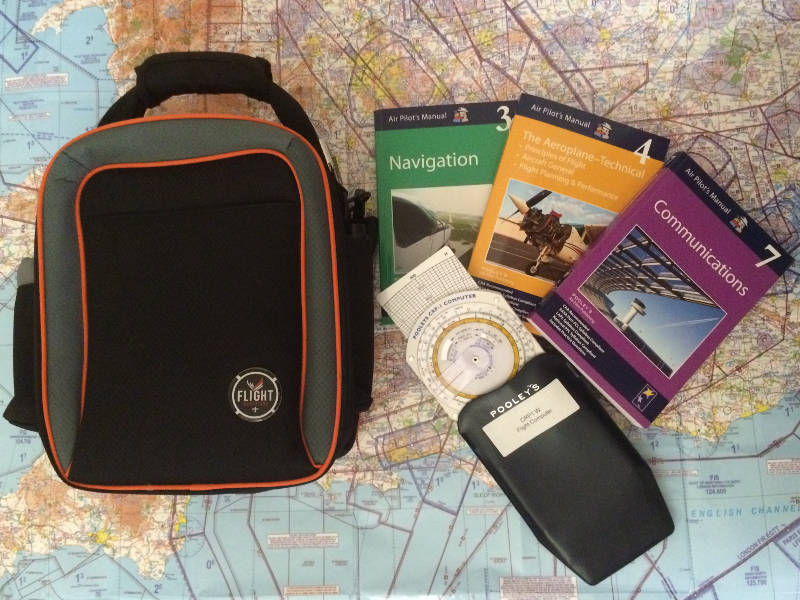 Back in July I bought the Pooley’s CB-8 knee-board along with volume two (Air Law and Meteorology), volume six (Human Factors and Pilot Performance) and the EASA supplement (Operational Procedures) of the Air Pilot’s Manuals. Then in September I bought an ASA Fuel Tester

Recently I’ve bought volume three (Navigation), volume four (The Aeroplane Technical) and volume seven (Communications) of the Air Pilot’s Manuals. I still haven’t taken any of the exams, but am working through the manuals in preparation. Some schools insist you take the Air Law exam before you fly solo, but this isn’t a requirement at The Bristol and Wessex Aeroplane Club, so I’m in no rush.

I was given the Pooleys CRP-1W Computer as a birthday present, but I have no idea how to use yet. I’ve heard it referred to as a ‘whiz-wheel’ and I’ll have to get to grips with it when I move onto navigation later in my training.

Along with the whiz-wheel I’ll also need a chart, so I bought the 1:500,000 Southern England and Wales chart (often described as the half-million, or even just half-mil chart). It’s an unwieldy thing that I can’t imagine trying to use while flying an aeroplane. Derek joked with me that one way of using charts is to fold it however you want, then pick the airfield in the centre and make that your home airfield!

I did a bit of Googling and came across this rather fascinating guide to folding an aviation chart from Cosford Flying Club and I must say I am pleased with the results, but I dread trying to unfold it in the cockpit if I ever fly off the edge of a fold.

Finally, to carry all this stuff I’ve got a purpose made flight bag, rather than the satchel I was using when I starter learning to fly. I chose the Flight Outfitters Lift Flight Bag. It’s just right for my needs, it has pockets on the sides for my fuel tester and voice recorder as well as for a water bottle or backup radio. There are pockets in the front and back for my map and log book. Inside there’s space for my GoPro, cables, sunglasses, keys, knee-board, flight computer etc.

Here’s hoping for fine weather next weekend so I can make use of this equipment.